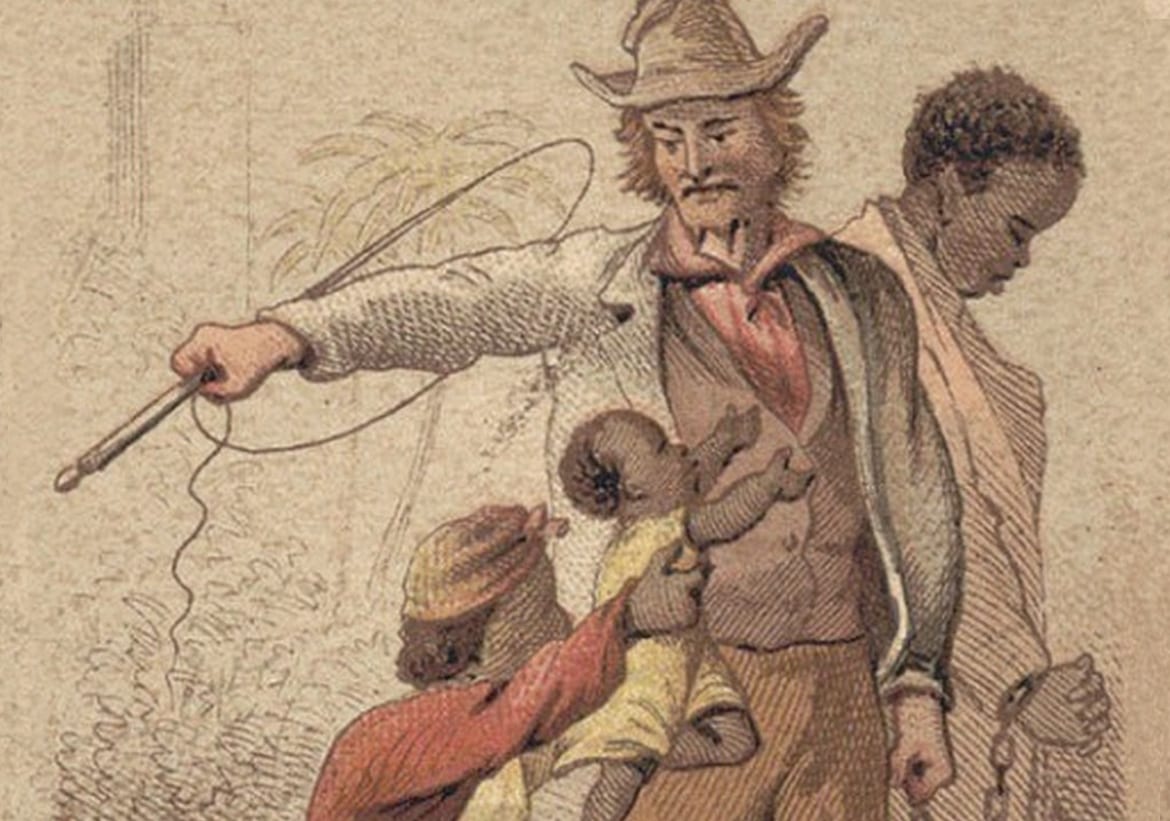 During the late 18th and for the first half of the 19th century, the plantation model based on the enslavement of Africans flowed over the lands of a new America. The demand for cotton to feed the spinning and weaving machines created by the Industrial Revolution was insatiable. Subsistence farming, as practiced by small family farms, could never meet the rapidly increasing demand for cotton fiber.

And so with each push of westward expansion planters bought up rich river valleys for growing the single most profitable cash crop of the day – cotton. From Georgia to Texas, from the Chattahoochee to the Brazos the plantation model prospered on the rich, humid river deltas.

In 1848, with the cessation of hostilities between the U. S. and Mexico the plantation model began to spread across the new state of Texas. It continued across the Brazos and the Colorado and moved over the Guadalupe.

Slavery and the Cibolo

At a small, seemingly insignificant stream, called the Cibolo, east of San Antonio, the plantation model stumbled. Unlike the reliably green river valleys east of the Cibolo, west of the Cibolo the climate revealed its unpredictable nature. One year it might be as green as the Mississippi delta…

the next, dry as the Arizona desert.

During the 1850s, large-scale plantations came to the Cibolo Valley bringing with them over 600 hundred African Slaves. The western bank of the Cibolo Valley was located in Bexar County where slavery was known but not widely practiced.

Under the terms of a compromise, the U. S. Congress allowed African slaves to be brought to the new State of Texas from only the United States. They could not be imported from Africa or other countries. This restriction caused a dramatic increase in value for African slaves brought to Texas. While planters along the Cibolo could buy land for one dollar per acre, certain young male and female slaves could be valued as high as $1,500.00 each.

Slaves were bought and sold and occasionally traded for land. Many of these transactions were recorded in Bexar County Deed Records as in the case of the sale of Jane an eight year old girl.

The transaction was concluded for $500.00 cash.

Other county recording reveal even more details of the value of slaveowners’ holdings. In 1860, Wilson County was formed out of a portion of Bexar County. On the west side of the Cibolo resided the Sutherland family. In January 1863, the Chief Justice was William Sutherland, the County Clerk was John Sutherland. Mrs. A. M. Sutherland had died without a will and her heirs petitioned the Wilson County Commissioners Court to probate the estate. Included in the petition was an inventory and appraisement of the property held by the estate. 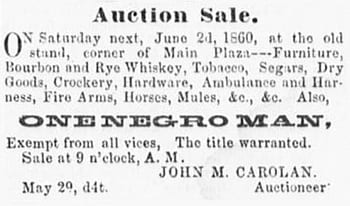 Plantation slavery required large numbers of slaves, usually under the control of an overseer. For planters settling on the Cibolo, slaves were their main source of wealth. Controlling them was the major pre-occupation. The planters demanded and received the support of city and county government to keep slaves under control and in their possession. The planters were especially fearful of slaves rising up and killing them.

Unlike in the Old South, the customs and legal infrastructure for accommodating the institution of slavery did not exist in Bexar County. Planters petitioned Bexar County and San Antonio to remedy that situation. Bexar County created Slave Patrols and San Antonio passed Slave Ordinances that regulated the conduct of slaves, free people of color and whites according to the wishes of the planters.

Felix Haywood, born into slavery on the Cibolo, expressed his views about being a slave to an interviewer from the Works Progress Administration in 1937. His comment regarding runaway slaves identifies a problem faced by planters anxious to keep their slaves:

Sometimes someone would come ‘long and try to get us to run up North. All we had to do was to walk, but walk South, and we’d be free as soon as we crossed the Rio Grande. In Mexico you could be free. They didn’t care what color you was, black, white, yellow, or blue. Hundreds of slaves did go to Mexico and got on all right. We would hear about ‘em and how they was goin’ to be Mexicans. They brought up their children to speak only Mexican.

By 1855, confronted by the realities of weather and runaways, many of the planters departed on a new path. It was path that would forever identify Texas as part of the Old West rather than the Old South: cattle ranching. 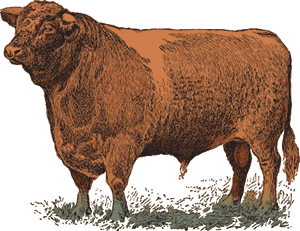 Cattle ranching was a Spanish legacy from the 18th century. Historically the lands along the Cibolo and San Antonio river valleys were grazing lands assigned to the ranches that supported the missions in San Antonio. The countryside was filled with unmarked cattle from abandoned Mexican herds.

The planters recognized what the Spanish had discovered over a hundred years before: these grazing lands were among the best in the world. From the smallest farmer to the owners of massive plantations they registered their cattle brands in County Courthouses.

Work by historian Judge Robert Thonoff, of Karnes County, documents the delivery of cattle from these grazing lands to Bernardo Galvez during the American Revolution for support of General Washington’s forces.

In 1854, using the new western route created in Texas through San Antonio, El Paso and San Diego, Michael Erskine, from just east of the Cibolo, drove cattle to the gold fields of California.

Before the Civil War, Cibolo planters like the Beall brothers and the Bristers moved west and settled new counties like Live Oak, McMullen and Atascosa counties. Sebastian Beall the legendary cattle rancher and Indian fighter of Live Oak and McMullen Counties first came to the Cibolo as a plantation owner.

The African slaves along the Cibolo were used for rounding up cattle, an occupation that regularly placed a slave on horseback in open country. Some believe this created a “new” type of relationship between the slave and his owner. It hints at the origin of the African cowboy.

African men and women on June 19, 1865 took their first steps as freed people on the lost Texas roads. Their transition from plantation slave to citizen is made up of countless stories filled with tragedy and triumph of struggle and success.

After the Civil War the freed Africans (called freedmen) gathered in communities scattered throughout Texas. Many of Bexar County’s freedmen settled in the eastern portion of the County and later the eastern quarter of San Antonio.