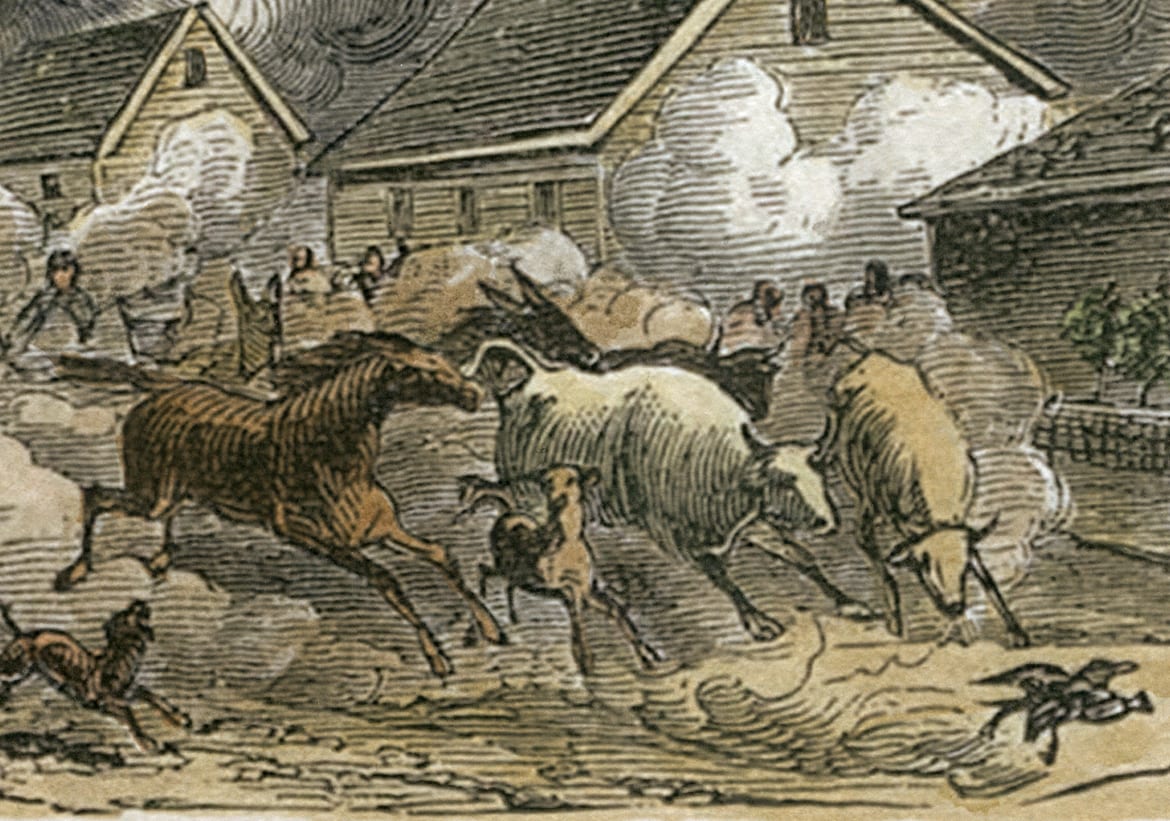 Colonel E. H. Cunningham had created a trail herd of 3,000 head of cattle on his east Bexar County ranch. Buyers culled through local herds; accepting only those animals that could make the long trip to the market in St. Louis, Missouri. The legendary Confederate Colonel hired veteran cowboys as drovers. With the lure of adventure along the trail and promise of a pocket full of cash, these men were eager to start the 1,000-mile journey.

Daylight was beginning to fail as the first raindrops, the size of bird’s eggs, struck the dusty cowboys and cattle. The large drops were the first sign this storm would be different. A mounting roar from the northwest caused three thousand restless cattle to stir. The men on horses slowly pressed in, eager to calm the herd. A stampede, especially before the herd was “trail broke,” would be a disaster.

The storm had minutes before cloaked San Antonio in complete darkness before unleashing its devastation. On May 20, 1868, at 7 PM, hailstones the size of pitchers, some weighing as much as five pounds, crashed down on the city. No building escaped damage or destruction. Roofs, walls, and glass windows were subjected to an artillery barrage of giant hailstones. Men, women, and children caught in the open were “beaten to shreds” with numerous reports of broken bones and rumors of deaths. Livestock was killed. Trees two feet thick were “twisted off like pipe stems”. Notable structures were reduced to ruble; the Old Presbyterian Church was leveled to the point that “only remnants of its stone side walls remained.” The forty-foot long metal roof of the Alamo was blown into Alamo Plaza. The City Tannery was destroyed.

What the newspapers called a “hail tornado” caught the herd and its drovers on open ground. In total darkness, the herd scattered. Brilliant flashes of lightning revealed glimpses of the horror. Blinded, the drovers dropped the reins and held on to the horns of their saddles hoping their sure-footed mounts would carry them to safety.

By 9 PM, the storm had passed, the sky cleared and stars were visible in the sky. A layer of hail, in places a foot-deep, covered the ground. The African freedmen, who had settled on the Martinez, emerged from their damaged houses beating their pots and pans and firing their guns into the air, creating a cacophony they believed would keep the lightning from returning.

The settlement waited for daylight to take account of their losses. The spring planting of the Silesian and African farmers in the area was destroyed. It was reported that even pasture grasses were obliterated. After a week of rounding up the scattered cattle, the drovers began the trek north to St. Louis. Miraculously, the Colonel, his men, and the herd, had survived.