The case of killing at Lavernia, Wilson Co. by Creed Taylor’s band of outlaws was taken hold of by General Mason at San Antonio in my absence before a General Court Martial at Austin. On my return, I immediately made an investigation and found that five men of Taylor’s party raised a difficulty with the Negro, jumped their horses into his yard beat him with their quirts, he on attempting to escape is run from field to field by the five men they shooting at him,  having run him down, made him lie down when they shot him several times through the head and body and beat him so as to disfigure him fearfully with their six shooters. They remained about town for some time before leaving for San Antonio where they remained for two days. I consulted with General Mason who was investigating the case.

The citizens who saw the murder could give no information, nor in fact, cannot tell you the true state of affairs. I am satisfied that sufficient evidence might be obtained to convict some of the party.  The old man Taylor knows the five men concerned one being as much guilty as the other, all being engaged in the chase for the Negro. This band estimated from twenty to fifty is a terror to Wilson County and in fact the whole country around. 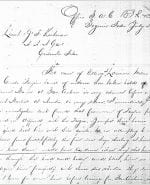 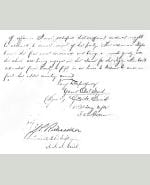 It is of great importance that this band of outlaws should be destroyed and captured. Resort to extreme measures if necessary. If they escape, seize their property, if they have any and sell it as a fine. You will be sustained in any course you may take to accomplish the desired object. 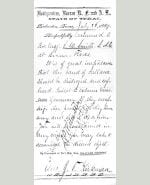