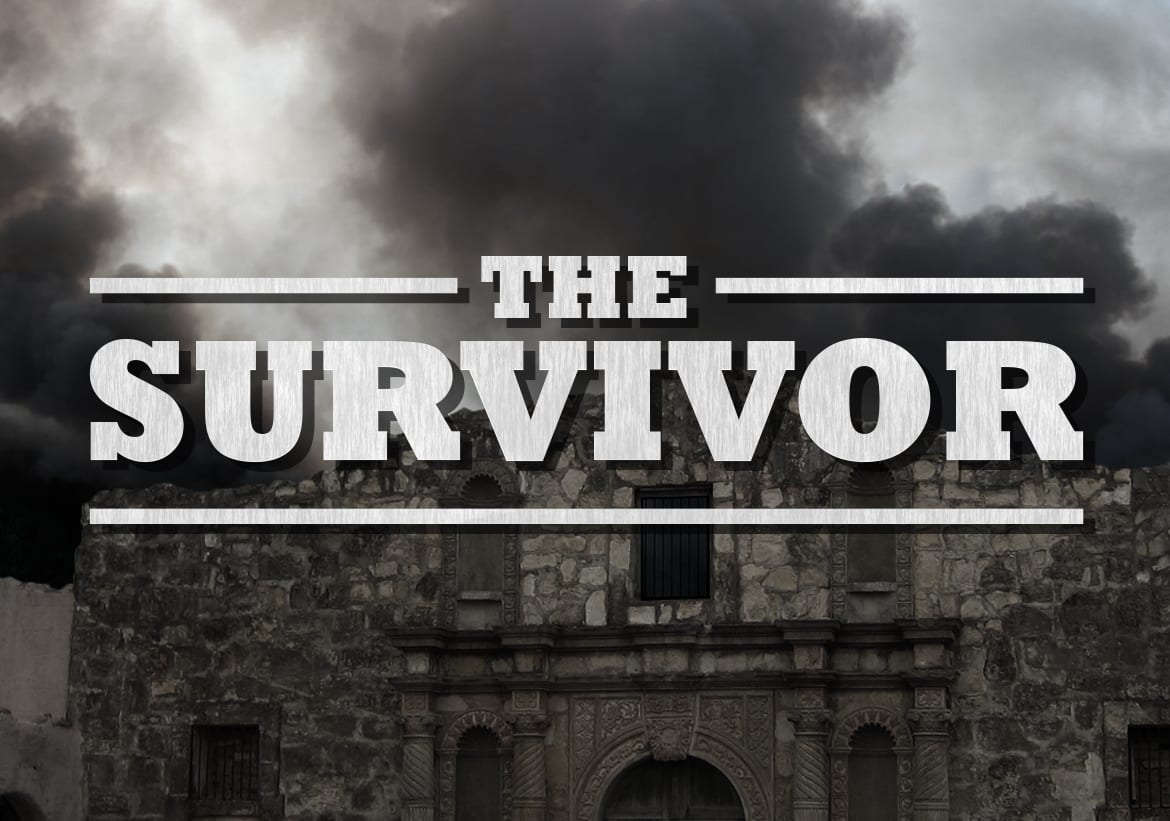 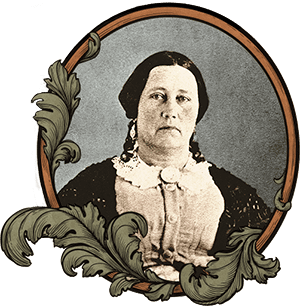 In 1836, Susanna Dickinson left the ruins of the Alamo and traveled east on the Gonzales Road and into history.

Born in Tennessee in 1814 as Susanna Wilkerson, she married Almaron Dickinson in Bolivar, Hardeman County, Tennessee on May 24, 1829.  She was only fifteen years old.

In February of 1831, Susanna and Almaron arrived at Gonzales in the DeWitt Colony. On May 5, 1831, Almaron received a league of land from Green DeWitt on the San Marcos in present day Caldwell County.  Almaron also acquired lots in Gonzales.  Almaron, a blacksmith, joined George Kimble in ownership of a hat factory in Gonzales on Water Street. On December 14, 1834, Almaron and Susanna’s daughter Angelina was born in Gonzales.

Come and Take It

In October 1835, Mexican troops arrived in Gonzales demanding the return of a cannon given the colonist for defense.  Almaron and other men from Gonzales gave the ultimatum to the Mexican forces “come and take it”.  Shots were fired, and the Texas Revolution had begun. On October 13, Almaron and other volunteers left Gonzales for San Antonio under the command of Stephen F. Austin.

Susanna and Angelina followed Almaron to San Antonio, and she joined him in the Alamo.  As the end of the siege approached, Almaron was assigned a position near the entrance to the chapel.  If the Mexican troops broke into the Alamo he was to see that none of the survivors were taken alive.  He was killed before he could act.  Susanna and the other survivors were taken to Santa Ana. Fascinated with Angelina, Santa Ana offered to adopt her, but Susanna refused.  She was then given a letter to take to Gen. Sam Houston at Gonzales. Susanna with Angelina and Col. Travis’s servant, Joe, began the trip to Gonzales. At the Cibolo Crossing on the road to Gonzales, they met Deaf Smith and Henry Wax Karnes, told them of the fall of the Alamo, and continued on the Gonzales with them. Another account is that of William Physick Zuber, historian and soldier of the Texas Revolution, in a letter to General William Steele, dated September 14, 1877 he wrote about Susanna Wilkerson Dickinson, a survivor of the Alamo:

On that night, about nine oclock, Colonel J. C. Neil rode into camp,&, in a conversation with Captain Bennett, confirmed the rumor which we had heard, that the Alamo had fallen.  He had borne an express from Colonel Travis to San Felepe [sic] or Washington, & was returning; when, on the 7th of March, I believe, at the ford on the Cibolo, between Gunzales [sic] & San Antonio, he met Mrs. Dickerson & her infant, & Colonel Travis’s servant, Joe.  They, then & there, informed him of the slaughter of his brave companion in arms.

The La Vernia Historical Association has place a plaque honoring Susanna Dickinson near the Texas State Historical Marker at the site of the Cibolo Crossing on the old Gonzales Road near La Vernia in Wilson County. 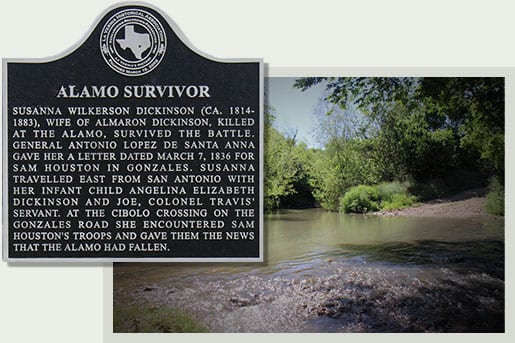 When the Runaway escape began, Susanna and Angelina fled Gonzales with others to escape the advancing Mexican forces.  After San Jacinto and the establishment of the Republic of Texas, Susanna approached the new government requesting financial assistance, which was denied.  In dire straits, Susanna in 1837 married John Williams, a man who proved to be abusive; she divorced him in 1838.  Susanna married several more times, but none of the marriages lasted.  Then in 1857 she married Joseph Hannig.  They moved to Austin, where he owned a cabinet shop, a furniture store, and a funeral parlor. After years of difficulty and unhappiness, Susanna finally found contentment with Joseph.

Susanna Dickinson Hannig died on October 7, 1883 after several months of illness.  Susanna in buried in Oakwood Cemetery in Austin, Texas. There is a cenotaph honoring her in the Texas State Cemetery, although she is not buried there.