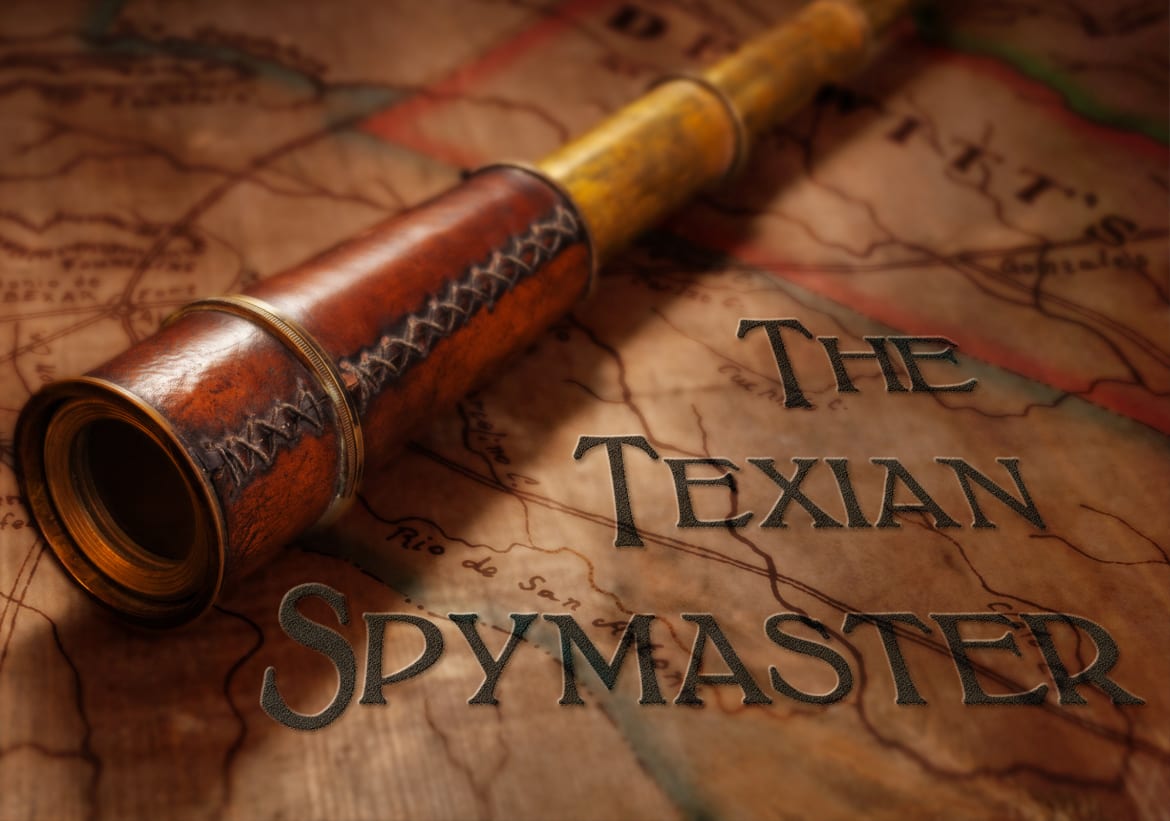 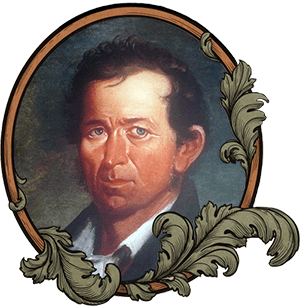 Erastus “Deaf” Smith’s land grant placed him in the path of Texas history.  The Siege of Bejar, the Fall of the Alamo and the Runaway Scrape are all associated with his land at the Cibolo Crossing with the Old Gonzales Road.

Erastus “Deaf” Smith was born April 19, 1787 in Dutchess County, New York.  When he was eleven, his family moved to Mississippi. As a young man, Smith travelled to Texas, where he remained only a brief time before returning to Mississippi. He moved to San Antonio de Bexar in 1821. A year later, he married Guadalupe Ruiz Duran, the widow of Vincente Duran. Vincente owned the land grant adjoining that of Smith.  Guadalupe and Vincente Duran had several daughters. Their daughter, Martina Duran, married Hendrick Arnold, a free black man who was a member of Erastus’s spy company during the Texas Revolution. 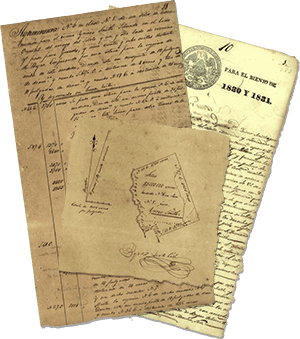 In December of 1833, Smith received a land grant from the Mexican government.  The grant was for a league of land on the northeast side of the Cibolo Creek in present day Guadalupe County.  The grant extended above and below the road to Gonzales from San Antonio.  One side of the Cibolo Crossing is on this property.  The Deaf Smith Oak Tree, where Smith spied on the Mexican troops, is on this property.  There was already an old structure on the land, when Byrd Lockhart surveyed the property in 1833. In 1836, Guadalupe and Erastus Smith sold the lower part of this grant, including the Cibolo Crossing to Byrd Lockhart.

Because he was married to a Tejana, Smith had no desire to declare his allegiance to either side in the early days of the Texas Revolution. When he returned from a hunting trip, he was denied access to his wife and family by Mexican soldiers in San Antonio. Soon after, Smith joined the Texian forces.  He was able to smuggle his family away from San Antonio, sending them to the Texian camp at Espada for their safety.

Erastus “Deaf” Smith spoke Spanish, knew the customs and culture of Mexicans, and was familiar with the area around San Antonio.  These assets were invaluable to the Texian army.  He was highly effective at intelligence gathering and became the leader of a spy company for the Texian army.  In December of 1835, Smith suffered wounds after guiding troops into San Antonio for the Siege of Bexar. Fearing for the safety of his wife and children he sent his family to Columbia in Austin’s colony. 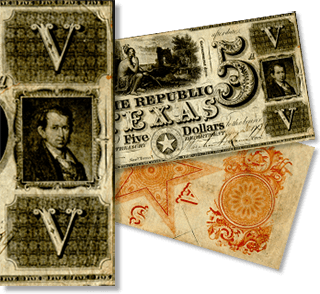 On February 15, 1836, Smith served as a courier for Travis, taking his famous letter requesting reinforcements for the Alamo to General Sam Houston in Gonzales.  The army then dispatched Smith back to San Antonio to determine the fate of the Alamo defenders.  Smith met Susanna Dickinson (widow of Alamo defender Almaron Dickinson, she had been in the Alamo when it fell) and learned of the fall of the Alamo; he returned with her to Gonzales.  Smith took part in the San Jacinto campaign. On the morning of April 21, 1836, he and his men destroyed the bridge over Vince’s Bayou; cutting off the only exit to the Brazos for Santa Ana and the Mexican Army, and the only ingress for General Filasola’s troops camped eight miles away to provide reinforcements for Santa Ana.

After the Revolution, Smith resigned his commission in the army.  He raised and commanded a company of Texas Rangers.  On February 17, 1837, Smith and his men defeated a band of Mexicans at Laredo. Soon after, he resigned from the rangers and joined his family, returning to San Antonio to live.

In San Antonio, Smith joined John Borden in a real estate business partnership.  He died in Richmond, Texas on November 30, 1837 at the home of his friend, Randall Jones.  Sadly, the location of his burial is unknown. However a marker stands at the corner of 6th and Houston in Richmond, near his believed burial site.  There is speculation that the burial place is beneath the street at this location. 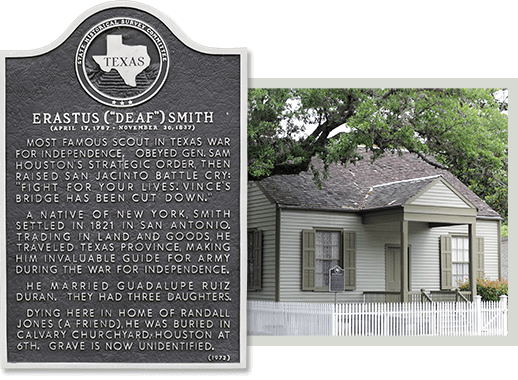 The Family of Erastus “Deaf” Smith

Guadalupe and Erastus had four children: Susan (1823-1849), Gertrudes (1825-1868), Travis (1827-1833) and Simona (1829-1890). Gertrudes married Macario Tarin; they lived in Graytown, and are buried there.  Susan was married to James Fisk, and when she died he married Simona. Guadalupe Ruiz Duran Smith died in a cholera epidemic in San Antonio (as did Hendrick Arnold and possibly Susan Fisk) on May 1, 1849.  She was buried in the old Campsanto.  It was the first cemetery in San Antonio; it no longer exists.