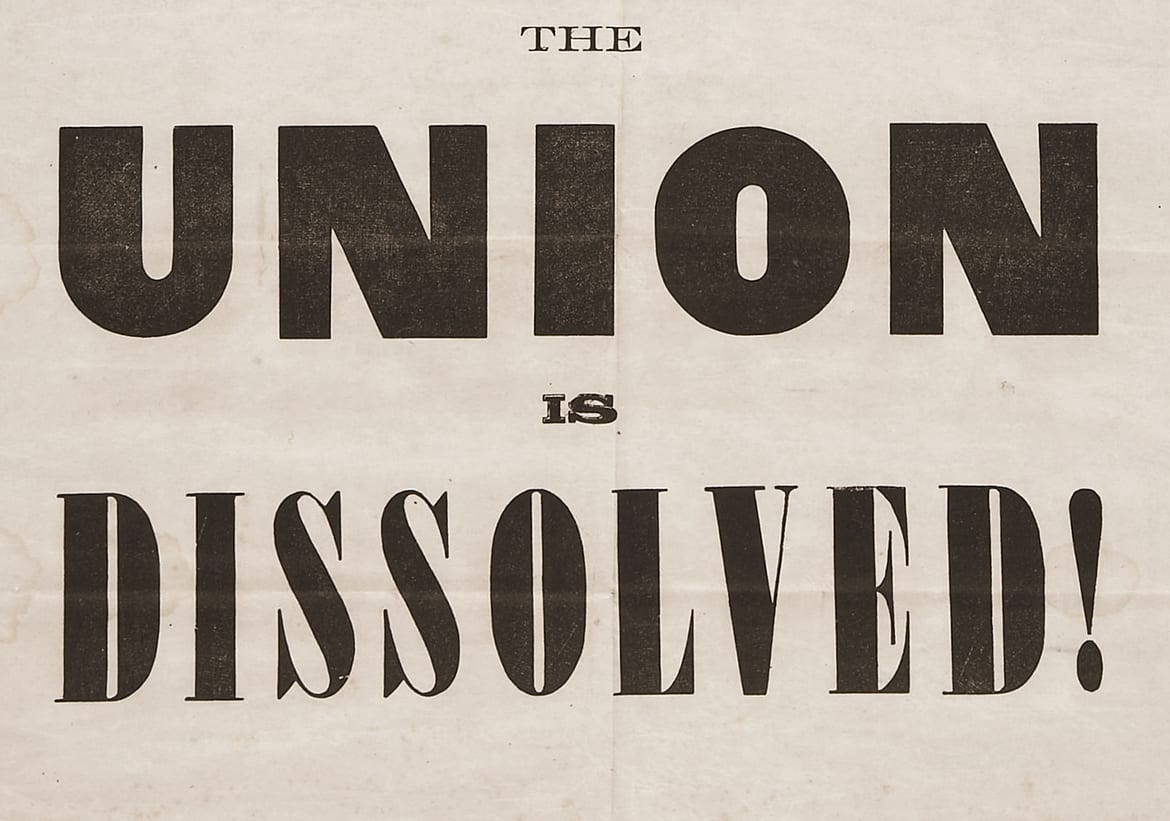 On February 1, 1861, a state convention voted to secede, making Texas the seventh state to leave the Union.

The Convention voted to leave the Union over the objections of their governor, Sam Houston. Houston reluctantly convened the convention in January 1861 for Texas to consider leaving the Union. On February 1, the Convention voted 166 to 8 in favor of secession. Houston believed Texans were “stilling the voice of reason,” and predicted an “ignoble defeat” for the South. Houston refused to take an oath of allegiance to the Confederacy and was replaced in March 1861 by his lieutenant governor, Edward Clark.

The Secessionist Convention issued a document setting forth causes that the Convention believed required Texas to secede from the Union.

The government of the United States, by certain joint resolutions, bearing date the 1st day of March, in the year A.D. 1845, proposed to the Republic of Texas, then a free, sovereign and independent nation, the annexation of the latter to the former, as one of the co-equal states thereof,

The people of Texas, by deputies in convention assembled, on the fourth day of July of the same year, assented to and accepted said proposals and formed a constitution for the proposed State, upon which on the 29th day of December in the same year, said State was formally admitted into the Confederated Union.

Texas abandoned her separate national existence and consented to become one of the Confederated Union to promote her welfare, insure domestic tranquility and secure more substantially the blessings of peace and liberty to her people. She was received into the confederacy with her own constitution, under the guarantee of the federal constitution and the compact of annexation, that she should enjoy these blessings. She was received as a commonwealth holding, maintaining and protecting the institution known as negro slavery – the servitude of the African to the white race within her limits – a relation that had existed from the first settlement of her wilderness by the white race, and which her people intended should exist in all future time. Her institutions and geographical position established the strongest ties between her and other slaveholding States of the confederacy. Those ties have been strengthened by association. But what has been the course of the government of the United States, and of the people and authorities of the non-slave-holding States, since our connection with them?

The controlling majority of the Federal Government, under various pretences and disguises, has so administered the same as to exclude the citizens of the Southern States, unless under odious and unconstitutional restrictions, from all the immense territory owned in common by all the States on the Pacific Ocean, for the avowed purpose of acquiring sufficient power in the common government to use it as a means of destroying the institutions of Texas and her sister slaveholding States.

By the disloyalty of the Northern States and their citizens and the imbecility of the Federal Government, infamous combinations of incendiaries and outlaws have been permitted in those States and the common territory of Kansas to trample upon the federal laws, to war upon the lives and property of Southern citizens in that territory, and finally, by violence and mob law, to usurp the possession of the same as exclusively the property of the Northern States.

The Federal Government, while but partially under the control of these our unnatural and sectional enemies, has for years almost entirely failed to protect the lives and property of the people of Texas against the Indian savages on our border, and more recently against the murderous forays of banditti from the neighboring territory of Mexico; and when our State government has expended large amounts for such purpose, the Federal

Government has refuse reimbursement therefore, thus rendering our condition more insecure and harassing than it was during the existence of the Republic of Texas.

These and other wrongs we have patiently borne in the vain hope that a returning sense of justice and humanity would induce a different course of administration.

When we advert to the course of individual non-slaveholding States, and that a majority of their citizens, our grievances assume far greater magnitude.

The States of Maine, Vermont, New Hampshire, Connecticut, Rhode Island, Massachusetts, New York, Pennsylvania, Ohio, Wisconsin, Michigan and Iowa, by solemn legislative enactments, have deliberately, directly or indirectly violated the 3rd clause of the 2nd section of the 4th article [the fugitive slave clause] of the federal constitution, and laws passed in pursuance thereof; thereby annulling a material provision of the compact, designed by its framers to perpetuate the amity between the members of the confederacy and to secure the rights of the slave-holding States in their domestic institutions – a provision founded in justice and wisdom, and without the enforcement of which the compact fails to accomplish the object of its creation. Some of those States have imposed high fines and degrading penalties upon any of their citizens or officers who may carry out in good faith that provision of the compact, or the federal laws enacted in accordance therewith.

In all the non-slave-holding States, in violation of that good faith and comity which should exist between entirely distinct nations, the people have formed themselves into a great sectional party, now strong enough in numbers to control the affairs of each of those States, based upon an unnatural feeling of hostility to these Southern States and their beneficent and patriarchal system of African slavery, proclaiming the debasing doctrine of equality of all men, irrespective of race or color – a doctrine at war with nature, in opposition to the experience of mankind, and in violation of the plainest revelations of Divine Law. They demand the abolition of negro slavery throughout the confederacy, the recognition of political equality between the white and negro races, and avow their determination to press on their crusade against us, so long as a negro slave remains in these States.

For years past this abolition organization has been actively sowing the seeds of discord through the Union, and has rendered the federal congress the arena for spreading firebrands and hatred between the slave-holding and non-slaveholding States.

By consolidating their strength, they have placed the slave-holding States in a hopeless minority in the federal congress, and rendered representation of no avail in protecting Southern rights against their exactions and encroachments.

They have proclaimed, and at the ballot box sustained, the revolutionary doctrine that there is a “higher law” than the constitution and laws of our Federal Union, and virtually that they will disregard their oaths and trample upon our rights.

They have for years past encouraged and sustained lawless organizations to steal our slaves and prevent their recapture, and have repeatedly murdered Southern citizens while lawfully seeking their rendition.

They have invaded Southern soil and murdered unoffending citizens, and through the press their leading men and a fanatical pulpit have bestowed praise upon the actors and assassins in these crimes, while the governors of several of their States have refused to deliver parties implicated and indicted for participation in such offenses, upon the legal demands of the States aggrieved.

They have, through the mails and hired emissaries, sent seditious pamphlets and papers among us to stir up servile insurrection and bring blood and carnage to our firesides.

They have sent hired emissaries among us to burn our towns and distribute arms and poison to our slaves for the same purpose.

They have impoverished the slave-holding States by unequal and partial legislation, thereby enriching themselves by draining our substance.

They have refused to vote appropriations for protecting Texas against ruthless savages, for the sole reason that she is a slave-holding State.

And, finally, by the combined sectional vote of the seventeen non-slaveholding States, they have elected as president and vice-president of the whole confederacy two men whose chief claims to such high positions are their approval of these long continued wrongs, and their pledges to continue them to the final consummation of these schemes for the ruin of the slave-holding States.

In view of these and many other facts, it is meet that our own views should be distinctly proclaimed.

We hold as undeniable truths that the governments of the various States, and of the confederacy itself, were established exclusively by the white race, for themselves and their posterity; that the African race had no agency in their establishment; that they were rightfully held and regarded as an inferior and dependent race, and in that condition only could their existence in this country be rendered beneficial or tolerable.

That in this free government all white men are and of right ought to be entitled to equal civil and political rights; that the servitude of the African race, as existing in these States, is mutually beneficial to both bond and free, and is abundantly authorized and justified by the experience of mankind, and the revealed will of the Almighty Creator, as recognized by all Christian nations; while the destruction of the existing relations between the two races, as advocated by our sectional enemies, would bring inevitable calamities upon both and desolation upon the fifteen slave-holding states.

By the secession of six of the slave-holding States, and the certainty that others will speedily do likewise, Texas has no alternative but to remain in an isolated connection with the North, or unite her destinies with the South.

For these and other reasons, solemnly asserting that the federal constitution has been violated and virtually abrogated by the several States named, seeing that the federal government is now passing under the control of our enemies to be diverted from the exalted objects of its creation to those of oppression and wrong, and realizing that our own State can no longer look for protection, but to God and her own sons.

We the delegates of the people of Texas, in Convention assembled, have passed an ordinance dissolving all political connection with the government of the United States of America and the people thereof and confidently appeal to the intelligence and patriotism of the freemen of Texas to ratify the same at the ballot box, on the 23rd day of the present month.

Adopted in Convention on the 2nd day of Feby, in the year of our Lord one thousand eight hundred and sixty-one and of the independence of Texas the twenty-fifth.