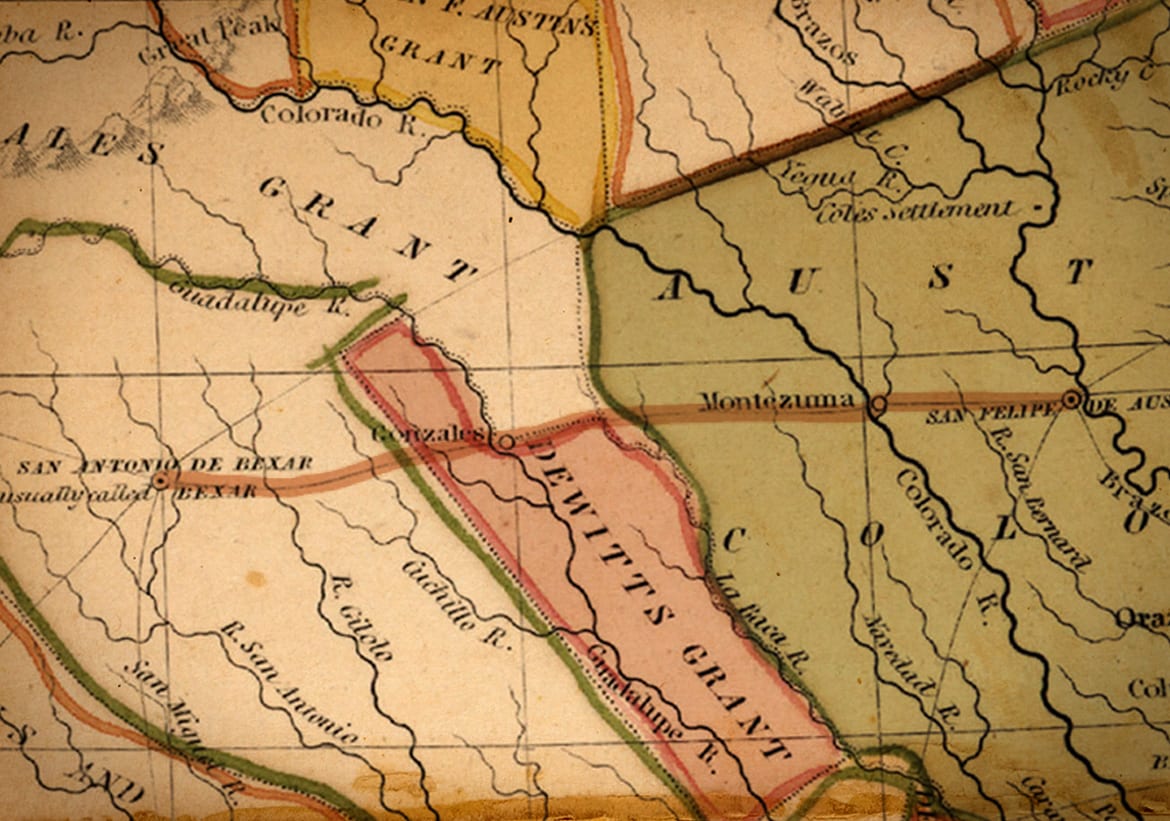 People lose things; it happens. We become distracted, we misplace things, we forget. Even communities lose things. Bexar County misplaced an historic treasure: The Old Gonzales Road. Time has hidden the path of the road between San Antonio and the town of Gonzales behind fences and under subdivisions. The events that occurred along its route have been assigned to other roads. The Texas heroes who travelled its miles have been forgotten.

In the late 1820s, Byrd Lockhart, with the authority of the Mexican administration in San Antonio, “laid out” a road from San Antonio to Gonzales. With that act, he gave Texas a historic treasure. He also created what would later become the boundary between Guadalupe and Wilson County.

The road followed a direct course that incorporated trails used by game, Indians, cattle, and Mexican rancheros. It crossed the Cibolo below Martinez Creek and crossed the Salado near present day Comanche Park. The road connected to Alameda Street (now Commerce Street) in San Antonio.

The Road of the Revolution

In 1835, Mexican troops traveled the Road to reclaim a cannon from the Texians in Gonzales. The Texian’s challenge “Come and Take It!” led to the first shots of the Texas Revolution. An historical marker near the present day village of Cost in Gonzales County memorializes the exchange on the San Antonio to Gonzales road (known as the Old Gonzales Road).

In 1835, Stephen F. Austin traveled this Road to lay siege to San Antonio de Bejar. The Immortal Thirty-two claimed their place among Texas legends when they galloped their horses along this road to re-enforce the Alamo. Alamo survivor Susanna Dickinson, with her child, met Sam Houston’s men at the Cibolo Crossing on this road, near present day La Vernia with news of the massacre. This news led to Sam Houston’s order to burn Gonzales and retreat east in the “Runaway Scrape.”

The natural ford where the Gonzales Road crosses the Cibolo was a rendezvous and marshalling point for troops during the Siege of Bejar and the Battle of the Alamo. The Texas State Historical Commission has designated the Cibolo Crossing on the Old Gonzales an historic site.

The legendary Erastus (Deaf) Smith Oak Tree, recognized by the Texas Forestry Services as a Texas’ historic tree overlooks the Crossing. Many claim that Smith used the tree to spy on the Mexican Army as they crossed the Cibolo. The tree is in the Deaf Smith Survey.

Communities on the Old Gonzales Road

The Old Gonzales Road’ path has been at the center of a boundary dispute between Wilson and Guadalupe counties. On January 29, 1842, the Texas Legislature passed an act “To lay out and organize the County of Guadalupe.” This may be the origin of the controversy. Section #1 of that act identified the Old Gonzales Road as its southern boundary.

However, On March 30, 1846 the Legislature passed an act “To create a new…County of Guadalupe” was. The act changed the southern boundary to a line drawn from the Southwest corner of Gonzales County to a point much farther down the Cibolo. This new boundary incorporated a triangular section of land along the east bank of the Cibolo down to Rocky Ford Crossing (below present-day Stockdale).

In 1860, the Texas Legislature created a peculiar “V” shaped Wilson County from a subdivision of Bexar and Karnes Counties. The Legislature closed the top of the “V” in 1869 giving Wilson county its present shape. The triangular tract of land formed by the “V” was taken from a reluctant Guadalupe County. This restored the track of the Old Gonzales Road as the boundary.

Guadalupe County believed that its southern boundary, as described in 1846, had been breached and their land taken by Wilson County in 1869.

The boundary between Wilson and Guadalupe County remained in contention until it was settled by an act of the Texas Legislature in 1874.

New Purpose for The Old Gonzales Road in 1848

In 1848, County Commissioners of Bexar County were dealing with Texas becoming a part of the United States. Part of Texas’ importance was the notion of a cross continent, all weather route connecting the east and west coasts. John Coffee Hayes, Samuel Maverick and Jose Policarpo Rodriguez blazed that trail from San Antonio west to El Paso del Norte (El Paso) and made the route a reality. There the road connected to a road laid out in 1846 and 1847 by Col. Phillip Cooke from San Diego, California to El Paso.

The port of Indianola on the Texas coast was now connected to Chihuahua in Mexico (via the Santa Fe Trail to Chihuahua). From there, travellers could then reach San Diego on the Pacific Ocean. The road supplied a line of forts that protected travelers on the road and settlers in western Texas. The military established a depot to provision these forts in San Antonio.

The wagons used to carry supplies to that depot required reliable roads. The Old La Bahia Road (passing through present Floresville) was a time worn route between San Antonio and Indianola. However, the additional traffic required alternate routes. Bexar County Commissioners responded by authorizing a new road be laid out using the San Antonio to Gonzales road (Old Gonzales Road) to Claiborne Rector’s house near Post Oak (now La Vernia), then departing that road and tracking south along the west bank of the Cibolo to Dr. John Sutherlands property near the Sulphur Springs (now Sutherland Springs).

The new road was called the Sulphur Springs Road. It crossed the Cibolo at Sulphur Springs and continued southeast to Yorktown and Victoria. Other jurisdictions opened a route from there to Indianola. In 1857 the San Antonio and Mexican Gulf Railroad was opened from Indianola to Victoria. This made Victoria an efficient connection to the port.

19th century Texas roads were primitive and subject to the whims of nature. Oxcart operators required forage for their animals along the way. Their individual paths were broad and variable as teamsters sought dry ground in rainy weather and avoided sand beds in the dry season. The success of wagon trains depended on a network of interconnected roads that provided alternative choices. Teamsters were constantly advising each other on routes to avoid washouts, bandits, and lack of water and forage.

The Indianola route through Sutherland Springs and Lavernia became a well-used part of the network. Thereby giving these communities their place on what came to be called the Road to Chihuahua. The United States Congress authorized mail contracts along the route enabling reliable stagecoach service. Post offices were opened in Sutherland Springs 1851, Post Oak (Lavernia) 1853, and Cottage Hill 1860.

In 1849, before the road was completed, California gold fever swept the country. Forty-niners on the way to California traveled this lower route; some, like W.D. Mays (Stockdale) and Joseph N. Dornstin (Lavernia), choose to settle on the Cibolo. Michael Erskine, a rancher from Guadalupe County, used this route to drive his cattle to California well before the cattle drives that began traveling north in the 1860s.

In the 1850s, the road provided access to the slaveholding farms on the Cibolo around Lavernia and Sutherland Springs. In 1855, Silesians who came to the area, created the settlement of St. Hedwig along the road. In 1861, the boys and men of the area march away on this road to their fate in the American Civil War.

The original purpose of the Old Gonzales Road ended when Texas secured its independence from Mexico. In the new Texas, governmental administration was moved to county seats; the need to connect Gonzales to Mexican administration in San Antonio was eliminated. The Road’s connection to Gonzales and its role in early Texas history began to fade from memory. It came to be related to a new chapter in Texas history associated with cattle drives, Chihuahua, and the port of Indianola.

The Civil War changed everything. Although few battles were fought in Texas, the casualty toll for the communities located on the Old Gonzales Road was horrific. The men and boys from around Lavernia and Mount Olive were among the first to volunteer for the ranks of the Confederacy; some were present at the earliest battles to the Appomattox surrender. Connally F. Henderson, the postmaster of “Lavernia” died at Gaines Mill, Virginia in the First Battle of Cold Harbor. He took with him the secret of the name he chose for the community. Even the newly arrived Silesians, who settled on the road in St. Hedwig, were pressed into service; of the 25 families living in St. Hedwig, nineteen men served in the Civil War.

The factional violence of the so called “Sutton-Taylor feud” associated with Dewitt and Goliad County spilled out along the Road. Members of the Taylor gang murdered a freedman in Lavernia in June of 1867. In March of 1868, the Taylor gang raided the community of St. Hedwig severely wounding Felix Tudyk, its 75-year-old patriarch, when he and his neighbors resisted. Acts of violence were directed against the freedmen who now resided in the area after being brought to the area in the 1850s.

Federal troops, a few years before brought security, prosperity, and opportunity. Now they were an occupying force that protected an unpopular government and fed the resentment by many to the freed slaves. Nevertheless, the network of roads to the port of Indianola continued to support the military and economy of western Texas through the 1860’s and the first half of the 1870s.

The issue was settled with neglect. By 1874, other routes traveling east from San Antonio had diminished the importance of the Old Gonzales Road. Among these routes was the Upper and Lower Seguin Roads, the Sulphur Springs Road, the New Sulphur Springs Road and the St. Hedwig Road. Over time, the deep sand bed section of the road between Wilson and Guadalupe Counties was enclosed within adjacent tracts of land. This process left few signs of the road’s existence.

The End of the Road

Two historic events marked the demise of the network of roads to Indianola. First, the destruction of Indianola in 1875 and 1886 by hurricanes. Second, the extension of the railroad to San Antonio 1877.

In Wilson County, the site of Claiborne Rector’s 19th century home on the Cibolo, above Lavernia is a remnant of the Old Gonzales Road. The site of Twenty-Mile House located near the present junction of FM 1346 and CR 347 is another. In Bexar County, the remnants of the road are scattered within private properties and buried under other roads. Old land plats and abstracts record its existence. In Gonzales County, the current FM 1682/State Road 97 west of Gonzales and east of State Road 80 follows the track of the original Old Gonzales Road.

As you drive the rolling countryside on Highways 775 or 539, pause at the county line markers between Wilson and Guadalupe counties and remember Byrd Lockhart, Deaf Smith, Stephen F. Austin, General Antonio Lopez de Santa Anna, the Texas Revolution, the Immortal 32, the Alamo, Susanna Dickinson and the Runaway Scrape…you just crossed their road.